Marina Bay Sands was one of two winning proposals for Singapore’s first integrated resorts. One of its key attractions is the SkyPark which offers 360 degree views of Singapore skyline.

When it comes to building one of the world’s most expensive standalone casino properties, it’s safe to say there were not many precedents to follow.

With 20 hectares of resort space and standing 57 storeys, the Marina Bay Sands impressively shapes the Singapore skyline. A 2,561-room hotel, 1.3 million sq ft convention centre and 800k sq. ft shopping mall are just a few of the attractions in this resort designed by Moshe Safdie architects.

The world’s largest atrium casino has 500 tables and 1,600 slot machines, with a total gaming space of 160,000 sq. ft. Another world’s first is the 1,120 ft SkyPark that is set atop the world’s largest cantilevered platform.

When Lysaght Singapore took on this job, they were faced with quite a few challenges.

To save weight, steel is used in place of concrete to build the slab. Steel beams are spaced apart at an optimum distance to create a truss that’s strong yet light enough to support the deck.

At such heights and complexity, to install the deck via propping would be impractical too. Thanks to the use of LYSAGHT® POWERDEK®, the construction needs minimal machinery and labour, which has also helped to lessen the load of the hoisting crane.

While most of the floor slab uses POWERDEK® for its superior load-bearing ability, LYSAGHT® BONDEK II® was used in less critical parts of the deck. By using steel of varying types and thickness, we managed to keep the cost at an acceptable level.

LYSAGHT® POWERDEK® is a decking system used as a formwork system during construction. It has an impressive spanning capacity, with increased unpropped spans of up to 5.2m and 6.0m with POWERDEK® 100® and POWERDEK® 120® respectively.

BONDEK® is a decking/ceiling structural system for concrete slabs. Its robustness and versatility make it a highly regarded product to increase construction efficiency. It also acts as a permanent formwork because its excellent spanning capacity allows for greater strength and less deflection. 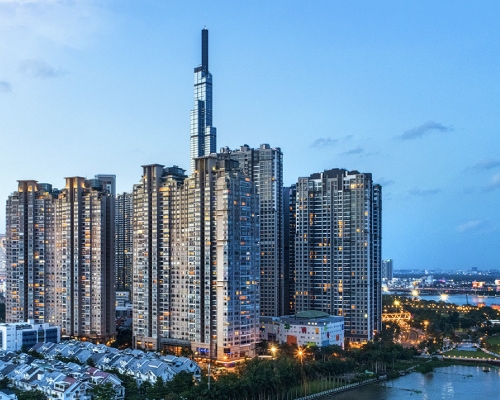